With the recent revival of patriotism, many more people are flying flags.  Here are some tips on the proper way to display flags, followed by information on the proper disposal of flags.

The federal flag code says the universal custom is to display the US flag from sunrise to sunset on buildings and stationary flagstaffs in the open.  However, when a patriotic effect is desired, the flag may be displayed 24-hours a day if properly illuminated during the hours of darkness.  Also, the US flag should not be displayed when the weather is inclement, except when an all-weather flag is displayed.

US Flags
On Memorial Day, it is flown at half-staff until noon and then raised.

The Star Spangled Banner was composed by Francis Scott Key, "In Defense of Fort McHenry" in September 1814. Congress proclaimed it the U.S. National Anthem in 1931.

Oh, say, can you see, by the dawn's early light,
What so proudly we hail'd at the twilight's last gleaming?
Whose broad stripes and bright stars, thro' the perilous fight,
O'er the ramparts we watch'd, were so gallantly streaming?
And the rockets' red glare, the bombs bursting in air,
Gave proof thro' the night that our flag was still there.
O say, does that star-spangled banner yet wave
O'er the land of the free and the home of the brave?

On the shore dimly seen thro' the mists of the deep,
Where the foe's haughty host in dread silence reposes,
What is that which the breeze, o'er the towering steep,
As it fitfully blows, half conceals, half discloses?

Now it catches the gleam of the morning's first beam,
In full glory reflected, now shines on the stream:
'T is the star-spangled banner: O, long may it wave
O'er the land of the free and the home of the brave!

And where is that band who so vauntingly swore
That the havoc of war and the battle's confusion
A home and a country should leave us no more?
Their blood has wash'd out their foul footsteps' pollution.
No refuge could save the hireling and slave
From the terror of flight or the gloom of the grave:
And the star-spangled banner in triumph doth wave
O'er the land of the free and the home of the brave.

O, thus be it ever when freemen shall stand,
Between their lov'd homes and the war's desolation;
Blest with vict'ry and peace, may the heav'n-rescued land
Praise the Pow'r that hath made and preserv'd us as a nation!
Then conquer we must, when our cause. it is just,
And this be our motto: "In God is our trust"
And the star-spangled banner in triumph shall wave
O'er the land of the free and the home of the brave!

History:  In 1814, about a week after the city of Washington had been badly burned, British troops moved up to the primary port at Baltimore Harbor in Maryland.  Frances Scott Key visited the British fleet in the Harbor on September 13th to secure the release of Dr. William Beanes who had been captured during the Washington raid.  The two were detained on the ship so as not to warn the Americans while the Royal Navy attempted to bombard Fort McHenry.  At dawn on the 14th, Key noted that the huge American flag, which now hangs in the Smithsonian's American History Museum, was still waving and had not been removed in defeat.  The sight inspired him to write a poem entitled Defense of Fort McHenry; later the poem was set to music that had been previously composed for another song by a Mr. Smith.  The end result was the inspiring song now considered the national anthem of the United States of America.  It was accepted as such by public demand for the next century or so, but became even more accepted as the national anthem during the World Series of Baseball in 1917 when it was sung in honor of the brave armed forces fighting in the Great War.  The World Series performance moved everyone in attendance, and after that it was repeated for every game. Finally, on March 3, 1931, the American Congress proclaimed it as the national anthem, 116 years after it was first written. 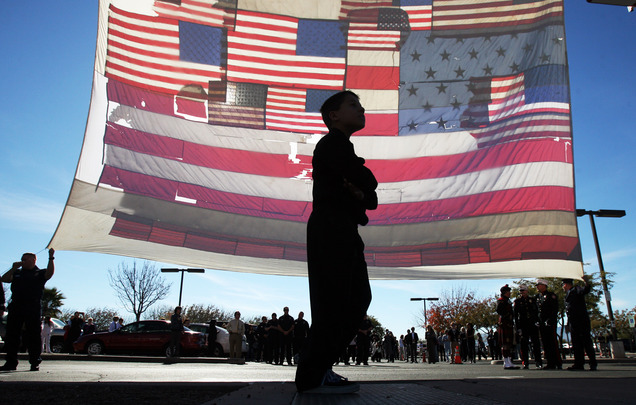 Other Flags and Order of Precedence for Flag Display 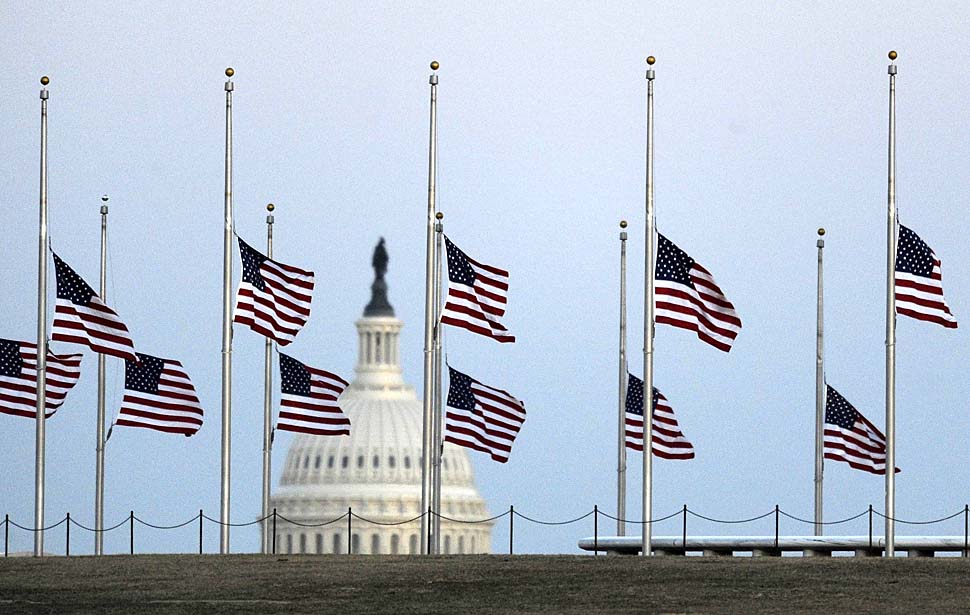 Order of precedence for service flags:

The reason our Governor gives for the flag outside the Bloomingdale Library to be flying half-mast is posted on the bulletin board in the Library’s foyer.